Our topic this term is 'Invaders and Settlers', with a focus on the Anglo-Saxons and Vikings.

Please note that the topic homework is due the week beginning 22nd May.  This will involve choosing one of the activities on the homework map and presenting it to the class.

I look forward to seeing your home learning!

Click the links below to find out what we have been learning so far! 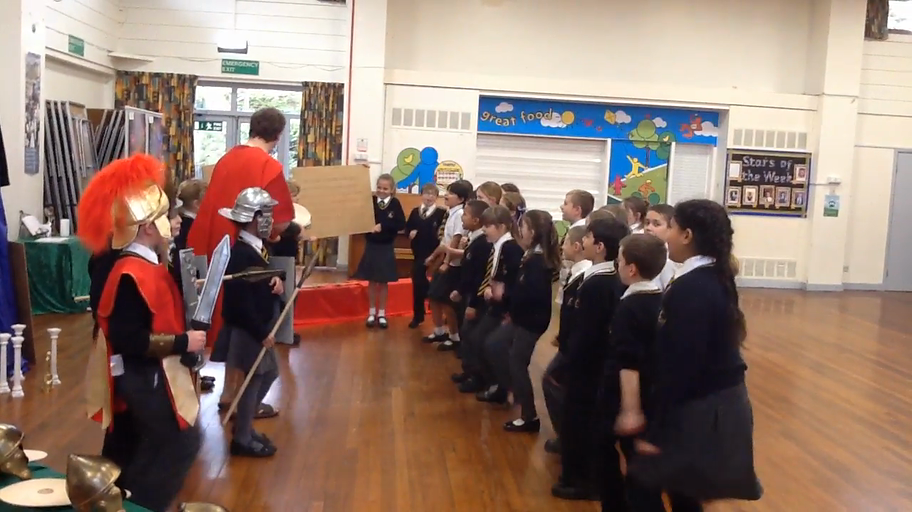 We learnt how the Roman army was a precise military machine and took on the role of soldiers in a Roman legionary.
This is one of the songs and marching formations we learnt.

On Wednesday 12th October Year 4 visited Fishbourne Roman Palace.  When we arrived we watched a short film about the history of the palace, and discovered that the site was uncovered accidentally.  It belonged to a Celtic chief, Tiberius Claudius Cogidubnus, who was very much pro-Roman.  We were all in disbelief that we were standing where the Romans would have been, many thousands of years ago.

After the film we had the opportunity to explore the palace.  The outdoor grounds were beautiful, and most of us agreed we would love to have a garden that size!  It was interesting to learn where the entrance to the palace would have been, and we discovered remains from where statues and columns had once stood.  The Roman gardener told us about the types of plants he grew, and which of those he used for cooking.

Inside the palace we were spoilt for choice with the amount of mosaics to look at.  Some of them were in a lot better condition than others, and we were able to identify specific patterns and designs within them.  We also had the opportunity to look around the museum, and attempt activities such as weaving and building a Roman road.

After a spot of lunch in the Autumn sunshine, we made our way to our Roman activity workshop.  Here we had the opportunity to don our Roman tunic and experience life during the Roman period.  There were activities such as, mosaic making, spinning wool, writing on wax tablets, arch and roof building and role-play in the Roman kitchen.

Sadly, our trip came to an end much quicker than we had hoped and it was time to return to school.  Some of the comments made tells us that we all had a very memorable day out.

"This is the best school trip ever."

"I can't believe we are somewhere where the Romans were.  I never thought this would happen."

"This place is amazing.  I can't believe it's so close to where we live!"

Year 4 have settled back into school life very well.  I was very impressed with how smartly children were dressed for their first week back, and it was lovely to see so many smiling faces!

A key focus for the first week back was to begin our 'growth mindset' journey.  We developed our understanding of having a growth mindset via our maths lessons, and learnt that in order to be successful we need to have a positive mindset.

In the first session we learnt that nobody was born with a 'maths brain', and we can all achieve something when we have a 'can do' approach.  We were briefly shown an image of dots and had to say how many we saw.  It was interesting to find out how people visualised the dots in different ways.

In the second session we discovered that mistakes are powerful, because when we make a mistake the synapses in our brain fire and in turn make new pathways, which helps our brain to grow.  We enjoyed creating our own emoji graphs, and analysed one another's graphs.

In the third session we focussed on believing in ourselves.  This became very evident during the task, when everybody was trying to work out how a pattern was growing.  It was fantastic to hear comments such as "Is it lunch time already?  I feel like we've only just started!", "Can I finish this before I go to lunch?"  and "I can feel my synapses firing!"

Next week we will complete our week of mindset maths.  Hopefully it will be just as successful as the previous week, and we will continue to develop a positive mindset.